Sitting in Whakarewarewa Forest, one of the oldest exotic forests in New Zealand, the area where the Treewalk™ now calls home was originally planted in the early 1900’s. Of the 170 different species planted, only a handful remain today – including the 6-ha stand of Californian Redwoods. It wasn’t until the 1970’s that the forest was opened to the public for recreation, and since then it has become the soul of the city attracting more than 600, 000 visitors a year.

You can find more information about the general forest and surrounds here.

Since opening in late 2015, Redwoods Treewalk™ has become a world-renowned experience and established itself as a must-do Rotorua attraction. It has continued to innovate, with the introduction of the Nightlights™ walk in December 2016, and the new 20 m high viewing platform built in 2017 – giving visitors the opportunity to get up even higher and the chance to stand on one of two glass viewing panels and see the forest floor below. 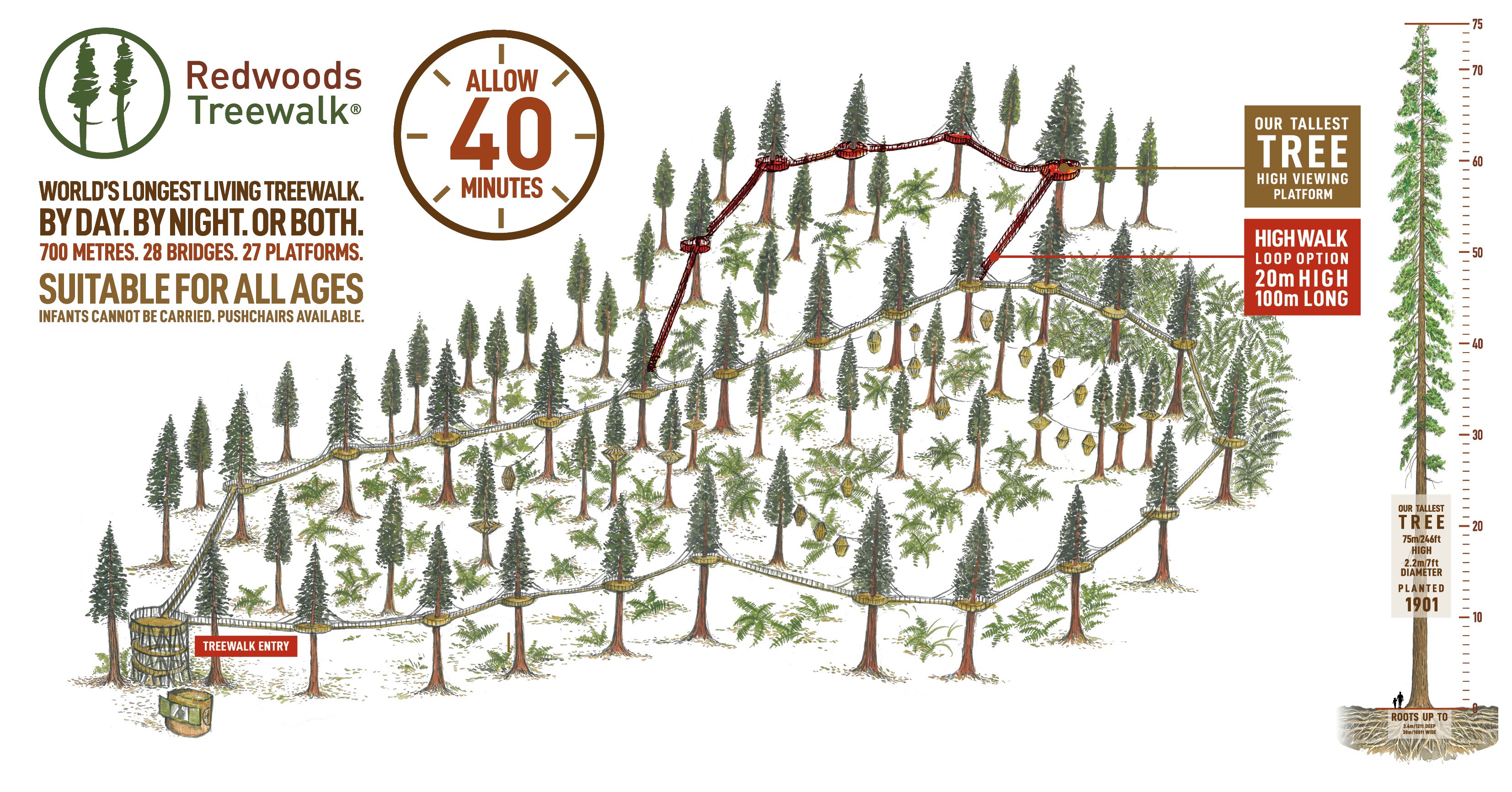 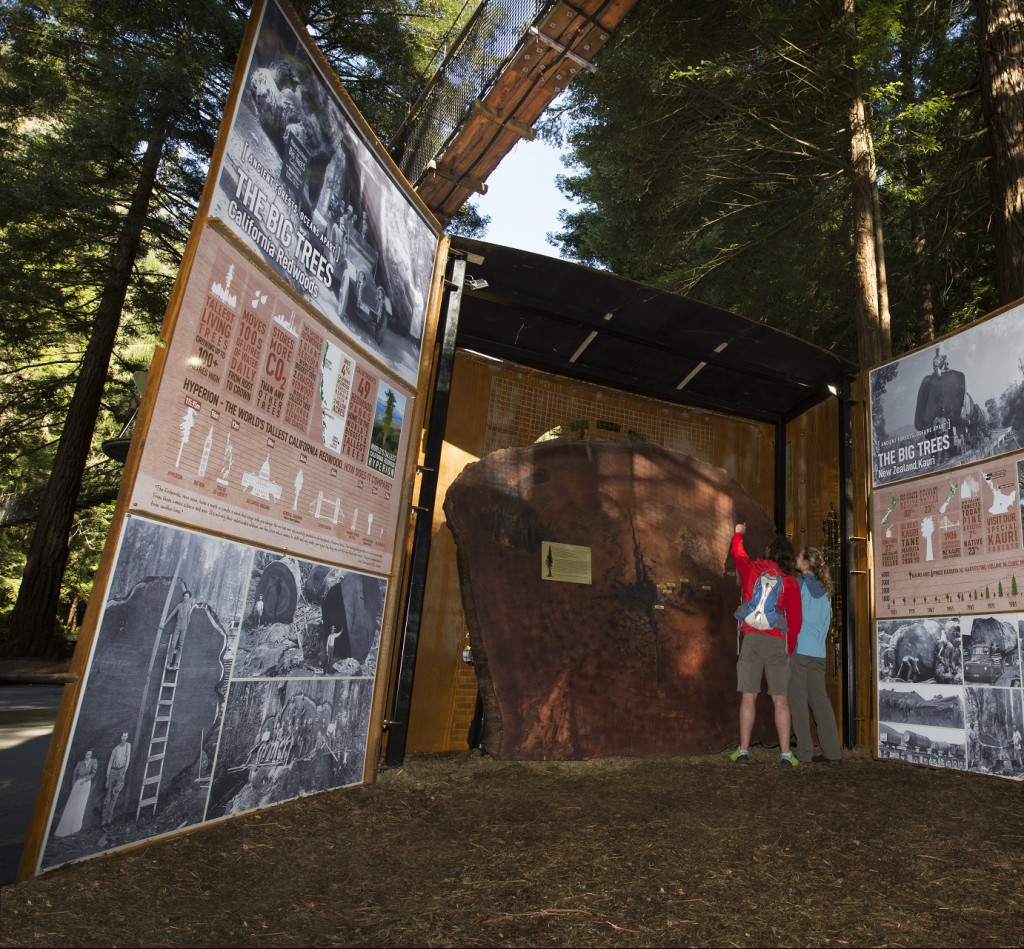 Come face to face with a piece of world history. Over 2,000 years old and 3.5 metres wide, the giant redwood ring is a log section from a massive American sequoia tree on display at Redwoods Treewalk.

View its lifespan and fascinating past as the passing of time and historical milestones on this earth is beautifully showcased across selected growth rings and the generations it has survived.

As you look right into the heartwood of its trunk, its ancient pith and the growth rings that illustrate the seasons it has endured, it is inevitable to gain an incredible sense of humility and responsibility to preserve and protect these gentle giants amongst us. 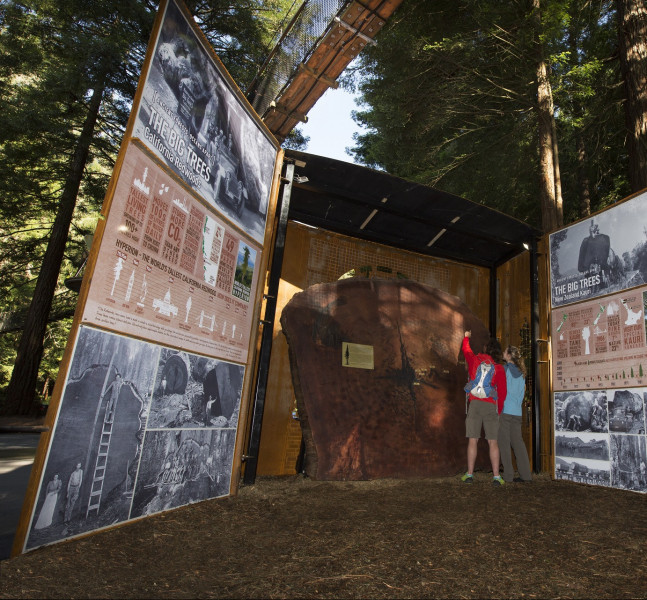 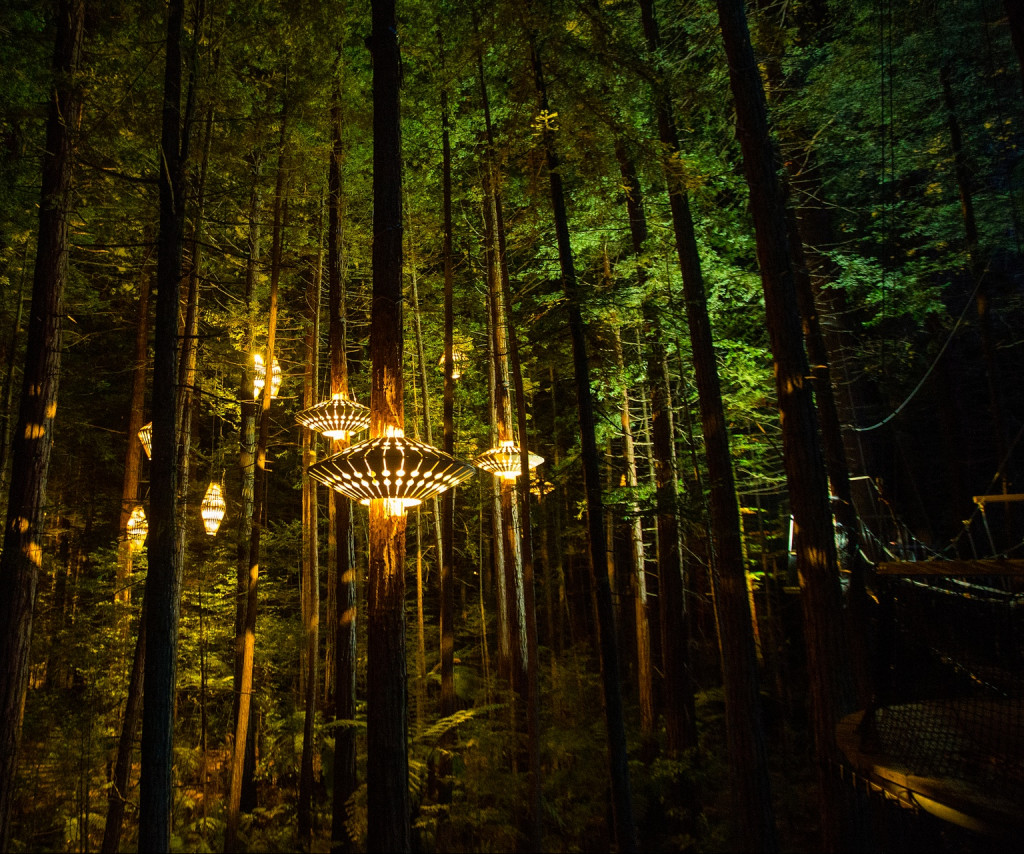 The lanterns and entry ramp you will see on the Nightlights Treewalk are designed by world-renowned designer and sustainability champion, David Trubridge.

David is an avid environmentalist and his wooden sculptural lights reflect the patterns and rhythms of nature. The wood is left naturally unfinished and the designs use only the minimum amount of materials. The design, sustainability and innovation elements form an inherent part of the experience. One of the Nightlights™ Titi, won a gold award at the New Zealand premiere design awards, The Best Awards.

Enjoy the amazing light display with numerous unique lanterns lighting up the forest and ferns. 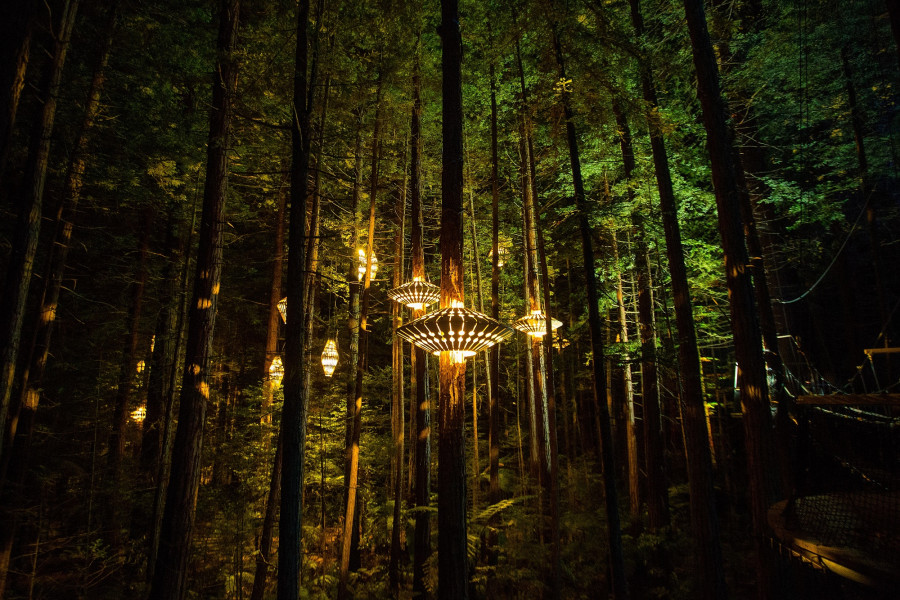 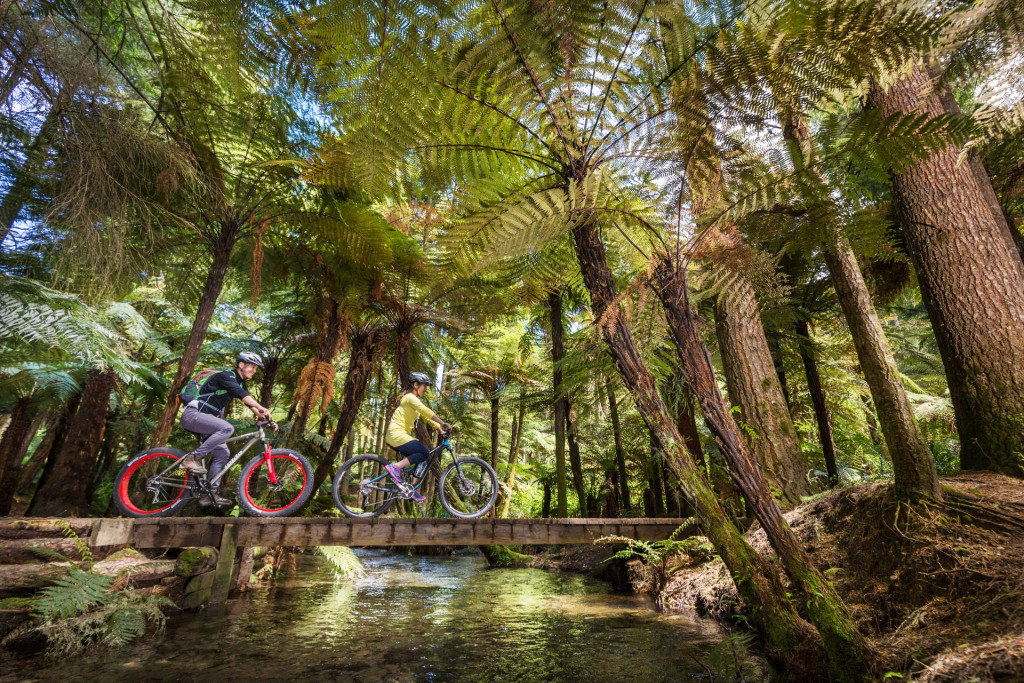 Relax and spend some time wandering along the easy walking tracks in the Redwoods Forest.

Ranging from 30 minutes to an hour, the Redwood Memorial Grove and Waitawa tracks offer a breathtaking experience.

Ground walks are free, but require a reasonable level of fitness and suitable footwear. 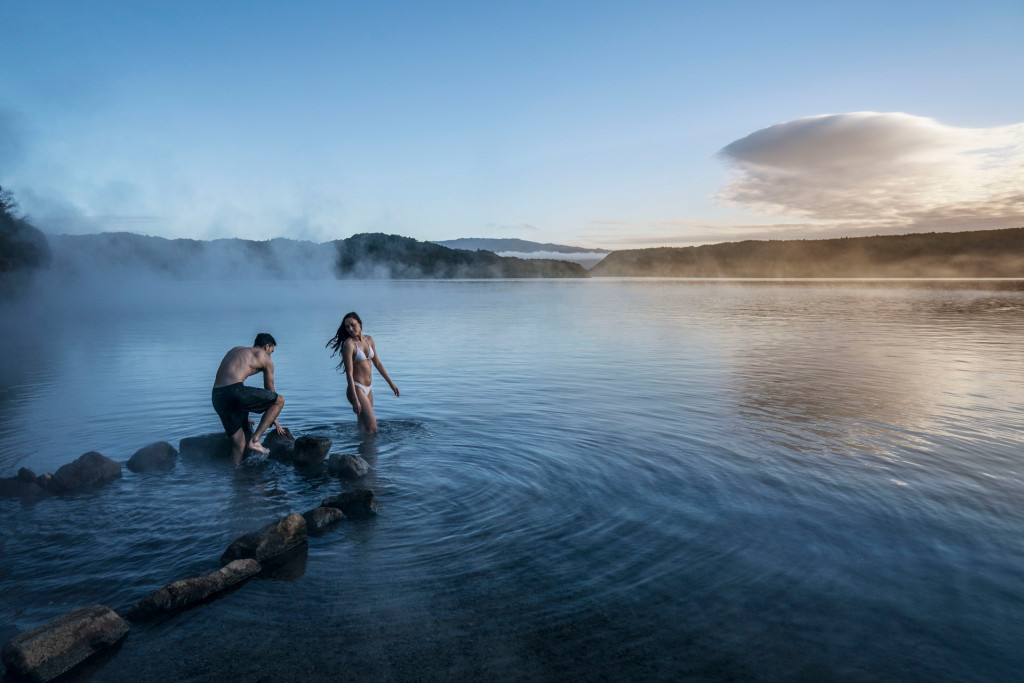 Take a quick car trip to view our picturesque lakes. Only minutes from Redwoods Treewalk are some of the most beautiful lakes in the region.

Just a 10 minute drive from the Redwoods Forest you’ll find the Blue and Green lakes – Lake Tikitapu and Lake Rotokakahi. Walk around the edge of Lake Tikitapu enjoying native bush and the stunning lake itself.

Five minutes further down the road is the beautiful Lake Tarawera. A water taxi can take you to Hot Water Beach for a warm dip! A perfect way to wind down after the Redwoods Treewalk.

Happy Easter 🐣 from all the team at @treewalknz...

Step back through time at The Giant 😯 #sequoia ...

Wishing everyone a great week ☺️ Not long now ...

Have a great weekend everyone!

#fanphotofriday Are you brave enough to stand on ...

Romance guaranteed at the Redwoods Nightlights💕...

Fear not! Rainy days at the Treewalk are still ...